Talk • Comics and the Cold War

From their earliest days, American comics either reflected the consensus about the country’s national interest or did their part in bringing that consensus about (as in the case of America’s involvement in World War II).  After the war, the fight against communism created new enemies for comics’ heroes to fight (super and otherwise). Though National Comics/DC had a reputation for conformity throughout most of the 20th century, it was Marvel Comics (and its previous incarnation, Timely) that made anticommunism the cornerstone of its entire superhero universe.  By the 1970s, younger creators were challenging the Cold War consensus in a company that had gained a reputation for being liberal and “hip.”  How did the company reckon with its Cold War past, and what was the Cold War’s legacy in the more mature works of the last three decades of the twentieth century? 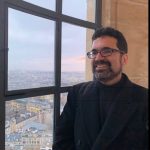 Eliot Borenstein is Professor of Russian & Slavic Studies and Senior Academic Convenor for the Global Network at New York University. He is the author of Men without Women: Masculinity and Revolution in Russian Fiction, 1917-1929 (winner of the 2001 AATSEEL book prize), Overkill: Sex and Violence in Contemporary Russian Popular Culture (winner of the 2008 AWSS book prize), Plots against Russia: Conspiracy and Fantasy after Socialism (winner of the 2020 Wayne S. Vucinich brook prize and the 2020 AATSEEL book prize), and Pussy Riot: Speaking Punk to Power (2020).  His current projects include three recently-submitted  book manuscripts: Soviet-Self-Hatred: The Secret Identities of Postsocialism, Marvel Comics in the 1970s: The World Inside Your Head  (initially serialized in draft form through Cornell University Press and as a blog), and Meanwhile, in Russia…: Russian Internet Memes and Viral Video (under contract with Bloomsbury Press).  He has begun work on HBO’s The Leftovers: Mourning and Melancholy on Premium Cable and Unstuck in Time: On the Post-Soviet Uncanny.

Co-presented by the Department of Germanic and Slavic Languages and Literatures, the Russian Flagship Program, and the Center for Slavic, Eurasian and East European Studies.